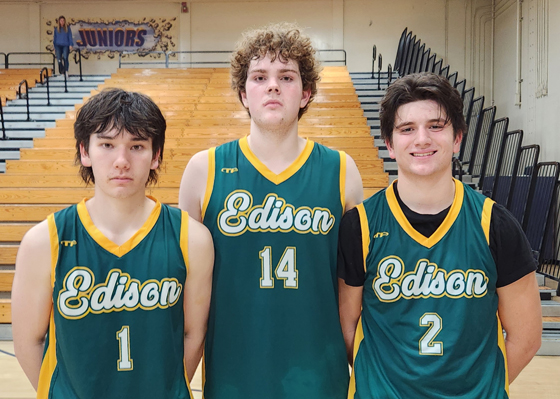 The Chargers (13-7, 1-0) hit a lot of 3-pointers, got contributions from non-starters and played good defense, especially in the fourth quarter when they held the Vikings (14-7, 0-1) for seven points .

“The kids played hard all the time,” Edison coach Rich Boyce said. “Everyone who was there participated and I always say that. ‘You might get beaten and they score, but you have to compete at every play,’ and the kids competed at every play.”

One thing Edison couldn’t do, however, was slow down outstanding Viking student Barak Simon, who led all players by 27 points.

The point guard made scoop shots, reverse layups, and hit outside shots, including a 3-pointer.

“He’s just a tough opponent, not just for us, but for everyone in the league,” Boyce said. “He’s tough. He will be a handful in the years to come.”

While the Chargers couldn’t stop Simon, they held the rest of the Vikings at bay.

Marina’s Bodi Armstrong scored 10 points but none in the fourth quarter, and no other Vikings had more than five points. Three starters were held for two points each.

“It was take anything you can take,” Hampton said. “Open shot, take and hopefully you make it.”

Dylan Hugues led the Chargers with 12 points, all of which came in the second half, and Dane Johnson led the team with eight rebounds.

The Chargers, ranked 15th on the County Country Top 25, kept the Vikings on point for the last four minutes primarily by shedding offensive rebounds to retain possession, drawing fouls and gaining a new 35 seconds on the shot clock.

Simon scored seven of Marina’s first nine points to give the Vikings a 9-3 lead.

But after Tu’s basket gave Edison an 11-9 lead, the Chargers led the rest of the way.

Simon’s 13 points in the first half kept the Vikings within five points at halftime.

The Chargers opened the third quarter on a 10-4 run and maintained control for the rest of the game.

The NHS is not just in a crisis, it is in an emergency