Man-made climate change has made the droughts that have hit large parts of Europe, China and North America this year at least 20 times more likely, according to an international group of scientists.

Climate change made the agricultural and environmental droughts hitting the northern hemisphere “at least 20 times more likely,” said the scientists, who analyzed soil moisture between June and August across the region except the tropics.

A summer as hot as this year’s would have been “virtually impossible” without climate change, they found.

“With further global warming, stronger and more frequent summer droughts can be expected in the future,” says Dominik Schumacher, co-author from the Institute for Atmosphere and Climate in Switzerland.

A severe heatwave this summer has fueled wildfires across Europe and pushed temperatures in England to a record high of over 40°C. Unusually hot and dry conditions also depressed river levels in Europe and China, affecting trade and power generation.

Crops suffered from the heat and lack of water, and the combined effects of the droughts contributed to the rising costs of basic necessities like food and energy.

“Over the summer, Europe’s fires were the worst on record, China issued its first national drought alert and more than half the US suffered from drought,” said the researchers, a group of 21 scientists from institutions in countries like Switzerland and France, Great Britain and the USA.

The effects of a particularly severe drought that swept western and central Europe were exacerbated by poor water infrastructure and high rates of water leakage from pipes, the researchers found. 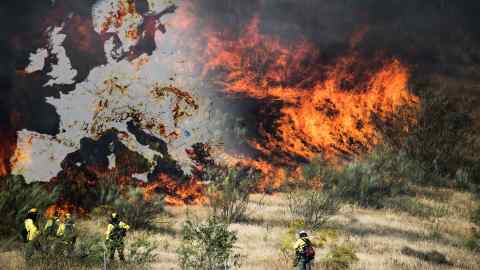 According to the study, which examined the moisture content of the top 7 cm and the top 100 cm of soil, a drought of the type recorded this year is “expected about once in 20 years” in today’s climate in both the Northern Hemisphere and Northern Hemisphere. . smaller Central European region.

Rising temperatures are the main cause of the increased drought risk, while changes in rainfall are less important, they added. The likelihood and intensity of extreme weather events, including droughts, are likely to increase with further warming, scientists have warned.

“In addition to causing tens of thousands of direct deaths this summer, heat and drought in Europe have exacerbated the cost of living crisis and amplified the impact of the Ukraine war,” said Maarten van Aalst, director of the Red Cross and Red Crescent Climate Center.

“We see the fingerprint of climate change not only in specific hazards, but also in the cascading of impacts across sectors and regions,” he said.

What the energy efficiency drive means for UK property rentals