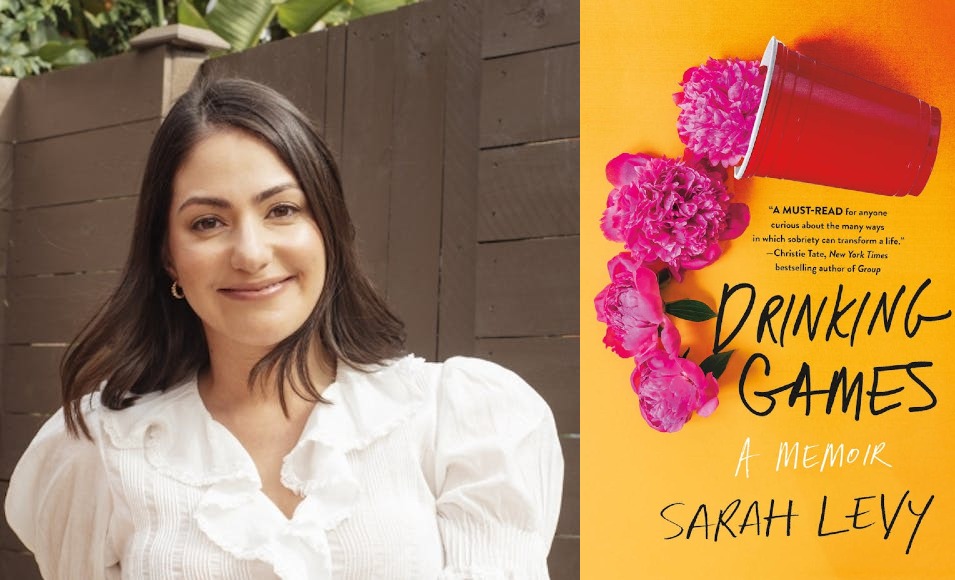 “Yes, we were at the top of our classes and industries,” Levy writes in her new memoir, Drinking Games. “But we weren’t going to be caught dead to show how much we cared, how exhausted we were, how hard we tried. We were taught to make it look easy; be successful without bragging.”

“Effortless perfection” — a term coined on the Duke University campus in 2013 — is a façade that can be detrimental, particularly to young women’s mental health.

Just ask Levy, 33, who partied a lot to be liked and appear confident and happy. She drank to get drunk because it calmed her social anxiety. While Levy passed out frequently, she was able to function again the next day, so she didn’t think she had a problem.

Eventually, when the consequences became so negative and potentially dangerous, she re-evaluated her life and her motives for drinking. Levy, who moved to Los Angeles in early 2020, will be speaking about her book and the road to recovery at Skylight Books on January 18 at 7 p.m. This interview has been edited for clarity and length.

Q. What do you hope readers will take away from your memoir?

When I struggled with my relationship with alcohol, I didn’t see anyone going through the same thing or being sober. My hope is that anyone struggling with their own alcohol use, or really anything that isn’t serving them in their life, learns that they are not alone and that there is hope on the other side of recovery.

Q. Growing up in the New Jersey suburbs, you felt academic pressures. After fighting on the SAT you went to your first house party where you write that an old friend demoralized you in front of his friends. You drank your first vodka and later got drunk. How quickly has drinking turned into a coping mechanism?

It always has been for me. I remember hearing from someone when I first got sober that their drinking started out as magic and then turned into medicine. I went back and forth between those two – from “I feel lighter” and “I’m having fun” to “I need this because I want to feel that way and I don’t.” Eventually it became more and more difficult to control.

Q. You only drank socially and held a job. Then one day you woke up next to your boss’s best friend with no memory of how you got there. How did that prompt you to seek help?

It wasn’t my worst night. I’ve had mornings waking up in the hospital. It was just that when I woke up in that room, I couldn’t believe it had happened. I respected my boss at the time very much and really wanted him to like me. And I felt devastated that he saw me like that. In the past I’ve had excuses like I didn’t eat a big dinner or everyone was really drunk. But the voice in my head told me I was out of excuses. Desperation at not feeling that way again made me seek help.

Q. You have adopted a 12 step program rooted in Christianity. What do you say to people who criticize 12-step programs for their emphasis on admitting powerlessness and leaning on a higher power?

This has kept me away from 12-step programs for years. I grew up Jewish and just had no connection to it. But I was so desperate for help and found it to be far more comprehensive than my preconceived notions. I was able to bring my own ideas about God and spirituality; The community could be a higher power because that is something bigger than you alone.

In terms of powerlessness, I definitely struggled with that language and narrative because it felt very at odds with my upbringing. I am powerful and a feminist. I am strong. i can do anything But the truth was that once I started drinking I wasn’t really in control of what was going to happen.

Q. What parts of your life make staying sober the hardest?

In the beginning it was definitely a challenge, especially going to parties and weddings. Now that I’ve been sober for a little over five years, I really don’t think about drinking anymore, which is amazing because it seemed impossible when I first thought about getting sober.

Q. Alcohol is a part of so many people’s lives. What is your advice to someone who finds it difficult to meet up with friends without drinking?

There are so many activities you can do that don’t revolve around drinking. If you’re invited to a party, bring a soft drink or make mocktails and if people want to add alcohol to theirs, let them. Remember that not everyone thinks about your decision not to drink and you are there to experience the event, whether it’s a birthday or a Christmas party.

Q. Has social media made it difficult for you to change your life?

There is good [on social media]but there’s a lot about it that can be really, really hard to navigate.

It’s really an interesting alternate reality for us to live in online. I was single and dating and many dating apps were connected to instagram profiles. So a potential date might go and see, “What is she doing for fun?” “Where was she last weekend?” I felt like getting sober was going to negatively impact my social and dating life, and I felt it looks very scary.

I have to be very conscious about setting limits on my social media use because I can still go down that rabbit hole of comparing myself to what everyone else is doing.

Q How has sobriety affected your friendships?

I was afraid that if I stopped drinking, my friends wouldn’t like me as much. The truth is most of them didn’t drink like I did and they worried about me. They had to help me get home and saw that I was struggling. You really supported us. Many of them say, “We like you better now.”

Q. As a sober woman, what have you discovered about yourself?

I’m more introverted than I thought. I was always going out and surrounding myself with people because I didn’t want to be alone. I didn’t really like myself. But now that I know myself, I really enjoy being at home, reading books, watching movies and having quiet nights. I also realize that I don’t know much and now I have the space to be curious and learn more.

How to address our fear of growing old – Orange County Register

Will Mystikal be arrested again in 2022? Charge and Victim – Is he being held in Ascension Parish Prison?