While the first few weeks are scary, Dixit Joshi’s is taking a beating.

After a weekend of damaging speculation on social media about Credit Suisse’s imminent collapse, Joshi took over as the bank’s chief financial officer on Monday, with the stock price making new lows and a gauge of default risk rising.

The British-South African banker showed up for his first board meeting in Zurich this morning and quipped to colleagues: “You forgot to send me flowers – all I got were these gifts from the market. So much for my honeymoon time!”

By Friday, the bank’s share price had recovered from a record low and its credit default swaps, a measure of default risk, were no longer flashing red. But when Joshi needed a reminder that he’d taken on one of the most demanding jobs in global finance, the market had provided it.

The 51-year-old, who first joined Credit Suisse in London in 1995, is back at a pivotal moment for the bank.

Chief Executive Ulrich Körner is racing to meet an October 27 deadline to announce a much-anticipated restructuring that will dwindle his investment bank, cut thousands of jobs and restore investor confidence that the scandal-hit group is a profitable one has future.

The already herculean task facing Körner, who has only been CEO since July, has been complicated by the fevered markets, as rising interest rates and falling stocks put investors on high alert for signs of financial stress.

With Joshi, Credit Suisse has brought a manager who is used to banking into the line of fire. His resume includes a stint at Barclays during the financial crisis, followed by just over a decade at Deutsche Bank, a lender whose own drive to reinvent itself in recent years has parallels with Credit Suisse.

“He’s been battle-hardened since his days at Deutsche Bank, and that’s what Credit Suisse needs now,” said Huw van Steenis, co-chair of the World Economic Forum’s Global Future Council, who has known Joshi for more than two decades.

After joining Deutsche Bank in 2011, Joshi was initially seconded to Singapore to reinvigorate the bank’s Asia Pacific equities business. A few more senior positions in the investment bank followed before then-Chairman John Cryan asked Joshi to take on the role of Group Treasurer in 2017.

The role required keeping an eye on the bank’s finances and maintaining close relationships with its investors – particularly bondholders – to ensure its capital needs were met.

Joshi took the job just as Deutsche Bank was rocked by a “near-death experience” after the group was fined a record $14 billion by the US Department of Justice following an investigation into misselling.

Between 2015 and 2020, the bank slumped into consecutive annual losses while also turning to shareholders for multiple capital increases. The lender is also still going through painful job cuts with a target of 18,000 jobs first announced in 2019.

“Somebody took Deutsche Bank’s script these years and applied it here,” a Credit Suisse executive said this week, referring to the problems both banks faced.

In fact, Joshi has already repeated a ploy from his former employer when his financial health came under intense scrutiny.

Credit Suisse on Friday offered to buy back its SFr3 billion debt to reassure investors and benefit from falling market prices. In 2016, Deutsche Bank repurchased billions of dollars worth of senior notes.

According to Credit Suisse executives, Joshi spent most of his first week speaking to the bank’s biggest clients and investors, as well as regulators. He also spoke to analysts at S&P Global, who this week confirmed their A/A-1 rating on the bank despite uncertainty about the strategic realignment and speculation it may take to raise more capital.

Joshi, who agreed to join in August, will be joined in the coming months by his predecessor David Mathers, who has been chief financial officer since 2010 and is expected to remain with the group through the end of the year, with internal plans, according to sources.

Credit Suisse didn’t disclose how much Joshi would make, though Mathers was the bank’s highest-paid manager last year, earning a total of 4.1 million francs ($4.1 million) in salary after bonuses for senior executives following scandals at Archegos and Greensill Capital were eliminated. Mathers combined the CFO role with the position of chief executive of international operations in London, which meant his salary was higher.

“His key advantage on the job is that he has a real understanding of sales and trading,” said the former colleague.

However, Joshi is not an advocate of radical change at Deutsche Bank, urging a nuanced and cautious approach, they added. “For me, the big question will be whether he has enough momentum to make a difference at Credit Suisse.”

Joshi was born in Durban, South Africa in 1971 and studied actuarial science and statistics before joining Credit Suisse.

After stints in London and New York, he was recruited by Bob Diamond and Jerry del Missier in 2003 to head up equity derivatives at Barclays’ expanding investment bank. He then headed equities for Europe, the Middle East and Africa.

“We were dealing with quite difficult market conditions at the time, particularly in the derivatives world,” said del Missier, co-head of Barclays’ corporate and investment bank. “There have been some huge swings in volatility.

“He has always been mature and calm in dealing with it and able to grasp the complexity,” said the former Barclays manager. 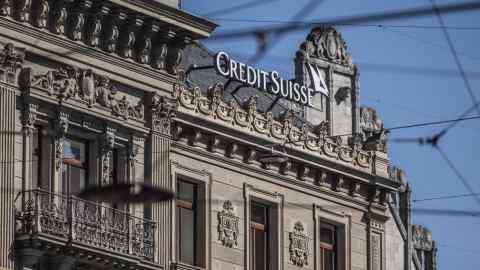 After Barclays bought the Lehman Brothers investment bank at the height of the financial crisis, Joshi switched to Deutsche Bank. Defying the banker stereotype, Joshi is a teetotaler and lifelong vegetarian who was persuaded to go vegan by one of his three daughters.

“He’s a pretty button-down guy,” added del Missier. “He’s not the type to bounce on the tables at La Voile Rouge in Saint-Tropez.”

Van Steenis said that Joshi’s actuarial training and forensic interest in calculating numbers would make him well suited for his new role.

The rise from Treasurer to Chief Financial Officer requires Joshi to take a broader view of the bank’s finances and assume greater responsibility for setting strategy. It is also much more visible to the outside world, just as Credit Suisse is in the spotlight.

Volatility in US Treasuries hits highest level since March 2020