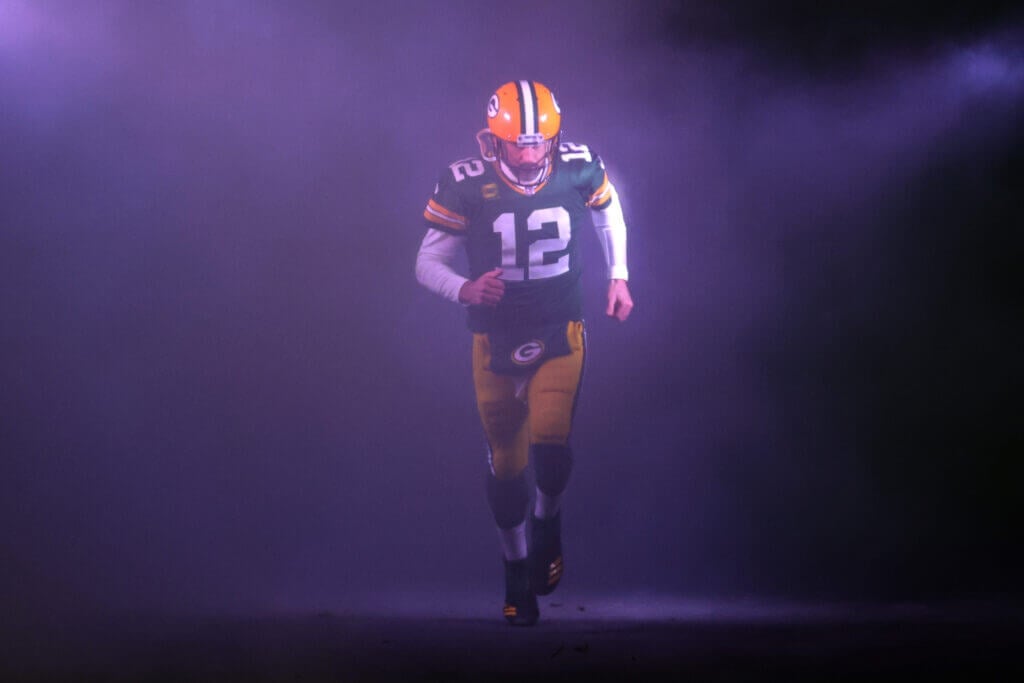 In a hallway off the main area of ​​the Packers locker room, Rodgers shared a long hug with another dear friend shortly after, letting David attack Bakhtiari before the two went their separate ways.

When asked about his jersey after the game by Lions rookie wide receiver Jameson Williams, Rodgers said he wanted to keep it and later explained that there are “some special ones” that he doesn’t like trading with opponents.

“It’s a night game, Lambeau, week 18,” Rodgers said. “There are just certain jerseys that you like to hold on to, like at games in Chicago or big games on Sunday night. It’s just a little bit different. It doesn’t last. It’s cool to give something to someone you really care about.”

And Rodgers, when asked what he’ll miss most if he hangs up his shoes sometime in the coming months, paused for 10 seconds while sipping from a water bottle on the podium before addressing six reporters who have covered him for the majority of his career and gets visibly emotional.

Then he went away.

Rodgers, 39, was picked as the No. 24 pick by the Packers in 2005. He has been their starting quarterback since 2008, four-time league MVP and Super Bowl champion. As with the end of last season, Rodgers’ future is uncertain. He has two seasons left on a contract extension, which he signed last offseason for $58.3 million guaranteed if he plays.

The scenes at Lambeau Field after Rodgers and the Packers fall short in a win-and-in game make you think this is one of the best quarterbacks of all time, but nobody really knows if it is. Rodgers completed 17 of 27 passes for 205 yards, a touchdown and an interception, another so-so performance compared to those we’ve seen from No. 12 in recent years in a season riddled with injuries, a reduced supporting cast and his own regression was littered.

What Rodgers said after Sunday’s 20-16 loss to the Lions sounded similar to what he said after last season’s playoff loss to the 49ers at the same stadium. He’ll take enough time to make his decision not driven by the raw emotions of another season ending prematurely, but he won’t hold the organization hostage.

“It’s a feeling,” Rodgers said. “Do I feel like I still have something to prove to myself? Do I want to go back and prepare for another grind? Or is it time? Is it time to step away? Is it time for another voice to lead this team? I think I need to go and think about these things. They are real to me. I’m very proud of what I’ve achieved in this league, but I’m also a realist and I understand where we are as a team. We are a young team. There might be some changes with some of the older guys and it might be time to step down. But I could take some time and say, ‘Fuck no, man. I have to get out there and do another run.’ But I have to see how it feels when I’m away from it.”

Rodgers has previously said he doesn’t want to go out like a “bum.” When asked Sunday if the end of this season and how he’s played could make him return, he replied, “Not really,” before saying he’s very proud of what he’s accomplished in the NFL, and that “it doesn’t always end with rainbows for everyone.” When he goes out like that, Rodgers doesn’t think it’s going to be a bum anyway. When asked if he felt like he still had “it,” Rodgers resoundingly said yes.

First thing he mentioned after that answer: the loss of wide receiver Davante Adams and an inability to fill the remaining void. Still, Rodgers might not get the chance to make it work in Year 2 with promising young receivers like Christian Watson and Romeo Doubs, even if he wants to play his 19th year with the Packers.

Aaron Rodgers: “I’m not going to take her hostage.”

Rodgers says he wants to take the emotion out of making a decision about his future before making one. pic.twitter.com/p2b4gtl0Mo

Rodgers has previously hinted that the Packers might not want him back, which he did again Sunday night, saying he doesn’t think the decision to return will be entirely up to him after a season in which he suffered a fractured one right thumb while plunging far down his MVP performance level over the past two years.

“I often think, and I’ve said this throughout my tenure here, that if you don’t succeed, the quarterback will take the main blame, and often if you succeed, they will. We’re going to get too much of that praise,” head coach Matt LaFleur said. “It takes everyone in that field and ultimately all 11 that have been out there over the course of the season and then our staff. I think we all have to do a better job together, period.”

General manager Brian Gutekunst traded to draft quarterback Jordan Love in the first round in 2020, and Love has sat behind Rodgers for the past three seasons. Gutekunst said in a press conference during Packers’ Week 14 Bye that he did not need to see any further game action from Love before making a decision about his fifth-year option in the upcoming offseason, but it remains unclear if the GM will consider Love thinks is fit to be the next starting quarterback at Green Bay if Rodgers leaves.

Rodgers was asked Sunday if Love was ready to become his successor.

“You don’t know you’re ready until you’re in that position,” Rodgers said. “I remember the day I slept in San Diego and woke up with 50 text messages that Brett (Favre) had retired. Then the emotions overtake you. ‘Oh man, now I’m the guy.’ But you still have to get out there and find your step with leadership and withstand that first year of having different defenses throw things at you and all the pressure that comes with everything. But I think he’s improving well, working on the little things and doing a good job in training. I think he has a chance of a long future in the league.”

Rodgers also didn’t completely rule out playing for another team if the Packers wanted to trade him, though he again postponed any decision about his future after the emotional source dried up. From Green Bay’s perspective, getting the finances working for a trade is a whole different story.

Last year, Rodgers’ decision to return became public on March 8. The deal he signed was for three years, but Rodgers said early in training camp that it’s essentially a one-year deal with two more attached and that he’d reconsider his future again after the 2022 season .

“That’s my brother,” Cobb said of Rodgers. “This is the man who stood at my wedding. This is the godfather of one of my children. It’s a lot bigger than football for us. Obviously we had a lot of moments together. We spent many years together on this team here in Green Bay. We’ll see where life takes us.”

All the Packers, and anyone else following Rodgers’ decision, have to do now is wait. It might seem like Sunday night was his farewell, but over the past few seasons, it’s already felt that way. It could very well be, but as Rodgers has said in the past, he could play for more than just one more season.

In other words, the one thing that’s certain after Rodgers emotionally left the podium Sunday night is that we don’t know much about Rodgers’ future at all.

“Eventually the carousel stops and it’s time to get off, and I think you know roughly when that is,” Rodgers said. “And that’s something to consider. is it time And what does the organization do? That is also part of it. But the competitive fire will always be there. I don’t think that will ever go away. Sometimes I think it carries over to other things that might never fill that big gap but like I said I feel good about what I’ve achieved in this league and wouldn’t regret walking away. But I have to see how it feels when I get away from it.”

Kirk Cameron, 'responding to the cries of parents' who 'feel bullied,' is headed to more public libraries

Cavaliers rookie Evan Mobley lets his play do the talking

Ridiculous strength in the depths of No. 1 ranked Brazil with the stars of Arsenal, Manchester United, Chelsea and Liverpool battling for World Cup spots alongside Neymar

Rennes v Leicester result: Wesley Fofana in goal as the Foxes push into the last eight of the Conference League