The Czech Republic has sent tanks and infantry fighting vehicles to Ukraine to bolster the Eastern European nation’s resilience against the Russian invasion.

The shipments are the first known time a foreign country has shipped tanks to Ukraine, whose President Volodymyr Zelenskyy has repeatedly asked for Western military support against the Russian attack.

“We believe this is the only thing that can stop the Russian armed forces from committing further atrocities,” said a senior Czech defense official, adding that the tank deliveries so far have been gifts rather than sales.

Five T-72 tanks and five infantry fighting vehicles were shipped in the latest shipment, which came to light after photos were posted on social media.

A second Czech official said the country is also in initial talks about providing other types of support, including help with the maintenance of Ukrainian heavy land forces at facilities in the Czech Republic.

After more than a month of fighting, Ukrainian forces have largely succeeded repel Russia’s attackand prevented the invading forces from capturing the capital, Kyiv.

In the past few days, Russia has withdrawn its armed forces from the area around Kyiv. However, Ukrainian officials have warned that Moscow is refocusing its offensive on the Donbass region, the second largest city of Kharkiv and other areas to the east. They have repeated calls for more Western military aid.

Numerous NATO countries have provided Ukraine with defense equipment. However, they have largely refused to send offensive weapons for fear of escalation. 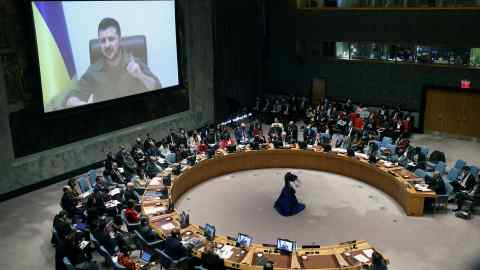 “There is no NATO pressure[to supply weapons]. . . This is truly an example of a sovereign decision by a sovereign state,” said Julianne Smith, the US representative to NATO, on Tuesday when asked about the Czech move, first reported by the Wall Street Journal.

Before the collapse of the USSR, Czechoslovakia was an important part of the Eastern Bloc’s defense industry, giving its know-how that in recent times has allowed it to play a role in supplying equipment to Ukraine.

According to the International Institute for Strategic Studies, a London-based think tank, the Czech military has 30 T-72M4CZ tanks, which are upgraded versions of the Russian T-72 workhorse, and had another 89 T-72 tanks in stock early on of the year.

It is also capable of retrofitting and repairing the type of Soviet-era military equipment used by the Ukrainian Armed Forces. “The Czechs have created a small industry to convert and modernize Soviet-era weapons,” said Henry Boyd, military analyst at the IISS.

A spokesman for the Czech Defense Ministry said the country had been sending military equipment to Ukraine since the beginning of the war, but declined to comment on the content for “operational security reasons”.

“We are constantly trying to find more suitable equipment to continue military aid,” the spokesman said.

Tensions are running high in the Barry Season 3 trailer