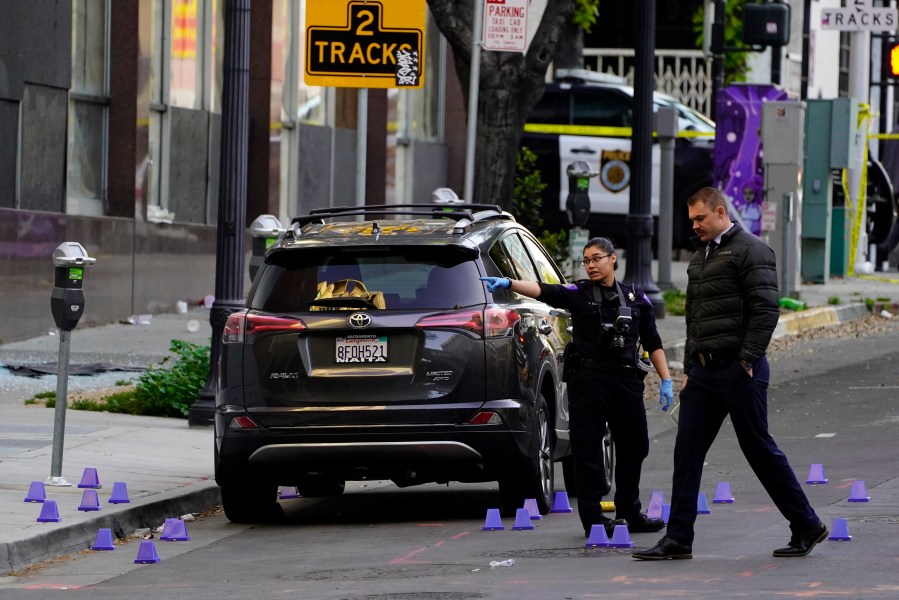 Authorities in the California capital on Monday identified the six people killed in the Sacramento mass shooting as police searched for at least two gunmen who opened fire in a crowd as bar-goers took the streets to closure on the outskirts of the entertainment district of the filled the city.

The Sacramento County Coroner identified the three women who were killed as Johntaya Alexander, 21; Melinda Davis, 57; and Yamile Martinez-Andrade, 21. The three male victims have been identified as Sergio Harris, 38; Joshua Hoye-Lucchesi, 32; and Devazia Turner, 29. One of the victims had been identified Sunday.

The sound of rapid-fire gunfire around 2 a.m. made people run in terror. Twelve people were injured in the neighborhood anchored by Golden One Arena, which hosts concerts and the NBA’s Sacramento Kings. The team’s home game against the Golden State Warriors continued as planned Sunday night, beginning with a minute’s silence for the victims.

Police Chief Kathy Lester revealed few details of the investigation and asked the public to share videos and other evidence that could lead to the killers.

“The level of violence that has just happened in our city is unprecedented in my 27 years here,” Lester told reporters during a news conference at police headquarters. “We are shocked and heartbroken by this tragedy. But we are also committed as an agency to finding those responsible and ensuring justice for the victims and their families.”

Small memorials with candles, balloons and flowers were set up near the crime scene on Monday morning. A balloon carried a message that read, in part, “You will always be in our hearts and minds. Nothing will ever be the same.”

The streets have been reopened to car and pedestrian traffic and police tape has been removed. Aside from a handful of TV cameras, there was little evidence of the previous day’s bloodshed on the downtown block.

Sacramento Mayor Darrell Steinberg and other city officials condemned the escalating violence in the city and urged people to keep coming downtown for events like NBA games and performances of the Broadway musical “Wicked.”

“We can never accept it as normal and we never will,” Steinberg said of the shooting. “But we also have to live our lives.”

The shooting erupted shortly after a fight broke out on a street lined with an upscale hotel, nightclubs and bars, and police said they were investigating whether the altercation was linked to the shooting. Videos posted by witnesses to social media showed rapid gunfire for at least 45 seconds as people screamed and ran for cover.

The shots startled sleeping guests at the Citizen Hotel, including a wedding party and fans of rapper Tyler the Creator, who had performed at a concert hours earlier.

From her fourth-floor window at the hotel, 18-year-old Kelsey Schar said she saw a man firing a gun. She could see flashes of the gun in the darkness as people ran for cover.

Schar’s friend Madalyn Woodward said she saw a girl lying on the ground who appeared to have been shot in the arm. Security guards from a nearby nightclub rushed to the girl’s aid with what appeared to be napkins to stop the bleeding.

Police found a stolen handgun and are investigating whether it was used in the shooting. Among the dead were three men and three women. Authorities were still working to notify family members and had done so publicly identified just one victim late Sunday, 38-year-old Sergio Harris, with no cause of death given. At least four of the 12 people injured had non-life-threatening injuries, according to the Sacramento Fire Department.

Sunday’s violence marked the third time at least six people have been killed in a mass shooting in the United States this year, according to a database compiled by The Associated Press, USA Today and Northeastern University. And it was the second mass shooting in Sacramento in five weeks.

President Joe Biden called for action on gun crimes in a statement Sunday.

“Today, America mourns yet another community devastated by gun violence,” Biden said. “But we must do more than just mourn; we have to take action.”

On February 28, a father was killed his three daughters, a companion, and himself at a Sacramento church during a weekly supervised visitation. David Mora, 39, was armed with a homemade semi-automatic rifle despite being under a restraining order barring him from firearm possession.

The crime scene stretched two blocks Sunday, closing off much of downtown. The bodies stayed on the sidewalk all day, as Lester said investigators were working to process a “really complex and complicated scene” to ensure investigators were gathering all the evidence they could to “see how.” the perpetrators of this crime will be brought to justice”.

Councilor Katie Valenzuela, who represents the area, said she took too many calls reporting violence in her district during her 15-month tenure. She cried at a news conference as she told reporters that the last call woke her up at 2:30 a.m. on Sunday.

“I am heartbroken and outraged,” she said. “Our community deserves better.”

In the Disney designed city of Florida

Softball League is proud to welcome everyone