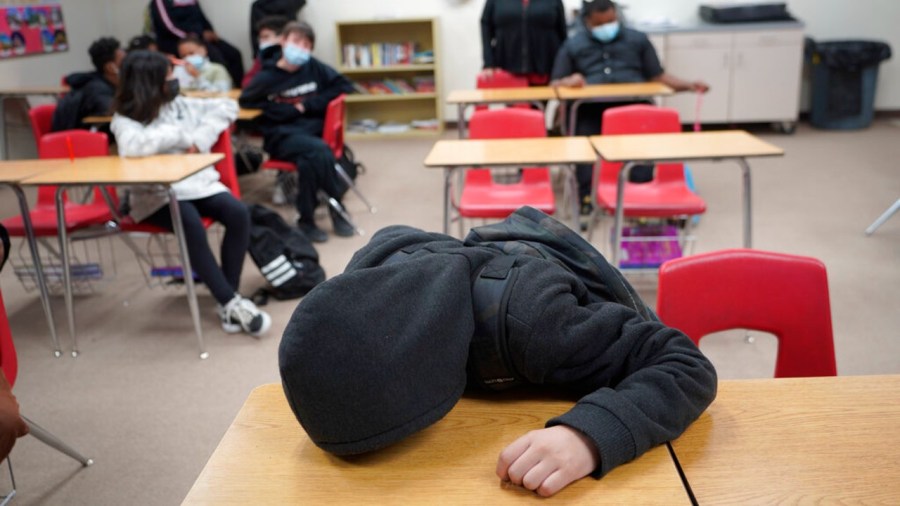 Since the pandemic began, experts have warned of a mental health crisis facing American children, which is now visibly playing out in schools across the country.

The silver lining in Luna-Herrera’s case is that special training has helped him know what to look for and how to respond to signs of a mental health emergency. He is among a small but growing number of California teachers and school staff enrolled in a course called Adolescent Mental Health First Aid. It teaches adults to recognize warning signs of mental health risks and substance abuse in children and prevent tragedy.

The California Department of Education funds the program for every school district that applies for it, and the pandemic has accelerated efforts to make such courses a state requirement. The training program is operated by the National Council for Mental Wellbeing and is available in every state.

“I don’t want to read about another teen where there were red flags and we looked the other way,” said Senator Anthony Portantino, author of a bill that will require all California middle and high schools to train at least 75% of their staff in behavioral health. “Teachers and school staff are on the front lines of a crisis and need to be trained to recognize the students who are suffering.”

Experts say depression and anxiety in children have been on the rise for years, but the unrelenting stress and grief of the pandemic has compounded the problems, particularly for those already suffering from mental health issues and cut off from counselors and other school resources during distance learning were.

In low-income areas, which experienced many negative childhood experiences prior to the pandemic, the crisis is even more acute, compounded by shortages of school staff and mental health professionals.

Many states have mandated suicide prevention teacher training over the past decade, and the pandemic has prompted some to expand the scope to include mental health awareness and support for behavioral health needs.

President Joe Biden has proposed new $1 billion in federal funding to help schools hire more counselors and psychologists and bolster suicide prevention programs. This was followed in December by rare public advice from US Surgeon General Vivek Murthy on “the urgent need to address the adolescent mental health crisis.”

Many children have recovered from the prolonged isolation of distance learning, but for others it will take longer and mental health issues often remain a stressor.

“We can’t assume, ‘OK, we’re back in school, it’s been a few months and now everyone should be back to normal.’ That’s not the case,” said Sharon Hoover, a professor of child psychiatry at the University of Maryland School of Medicine and co-director of the National Center for School Mental Health.

The Adolescent Psychiatry First Aid course helps distinguish typical adolescent behavior from warning signs of mental distress, which may be obvious or subtle. After noticing something is wrong, the course teaches that the next step is to ask the student without pressure or judgment, and let them know that you care and want to help.

One of his 12-year-old students felt their world was falling apart. Distance learning had turned their friendships upside down. Things with her boyfriend bordered on the violent. Her life at home was stressful. “I’m just done with it,” the girl told Luna-Herrera, sharing a detailed plan to kill herself.

The course teaches how to deal with such a crisis: raise the alarm and get competent help. Do not leave a person who is contemplating suicide alone. Luna-Herrera continued to talk to the girl while simultaneously contacting the school administration and the police.

“He absolutely saved that kid’s life,” said Katherine Aguirre, superintendent of Mojave Unified, which oversees the district of about 3,000 students, most of whom are Latino and black children from economically disadvantaged families.

Another supporter of teacher training is Harry Bruell, who hopes it can prevent the tragedy his family suffered. His daughter Taya died of suicide at the age of 14.

Shortly after her death, Bruell found a journal she had been keeping as part of an assignment for her high school in Colorado. In it, Taya drew a disturbing portrait that featured self-harm and wrote about how much she hated her body and hearing voices that she wanted to silence.

Her teacher read the assignment and wrote, “Taya, very thorough journal. I enjoyed reading the entries. A+” The teacher never told the school counselor or the school administration. Three months later, in February 2016, Taya killed herself.

“I don’t think the teacher meant to hurt our daughter. I think she had no idea what to do when she read those clear warning signs in Taya’s journal,” her father said.

He believes laws mandating behavioral health teacher training will save lives. “It teaches you to sound the alarm and not just walk away.”

A review of the fictional Celine Dion biopic Aline

Here are Indiana’s 3 billionaires according to Forbes