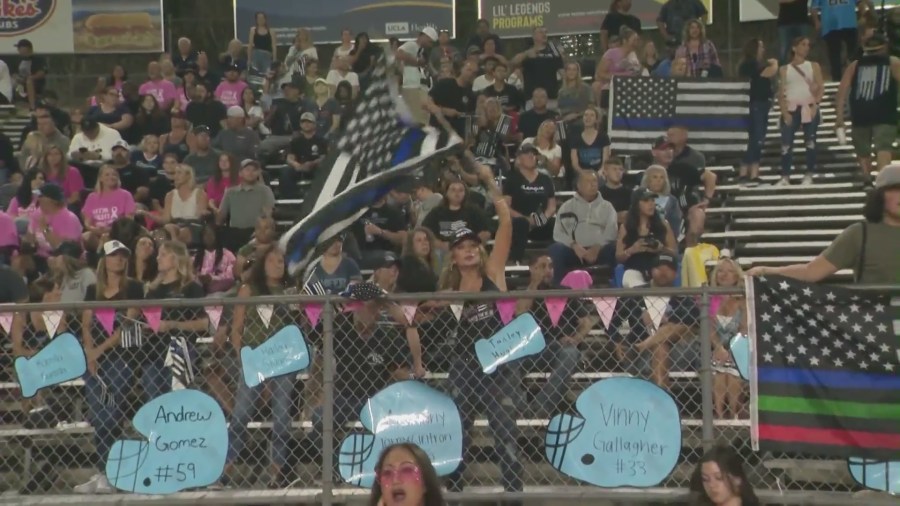 SANTA CLARITA, Calif. (KTLA) – After the Saugus High School football team in Santa Clarita, Calif. was criticized for taking to the field with a “thin blue line” flag this season, the controversial symbol will no longer be used Part of its pregame tradition – but some fans still bring their own flags to games.

The Florida duo have been caught stealing thousands of dollars in ‘liquid gold’, lawmakers say

After discussions between the school’s principal and Centurions head coach Jason Bornn, the decision was made to stick to Bornn’s maxim — “just love people” — and discontinue the practice, Kuhlman added.

“Out of respect for his commitment to inclusivity, kindness and respect (just loving people) and because the team never voted as a unit to carry this banner, Coach has decided to end this practice,” Kuhlman said.

Kuhlman repeatedly stressed that the district fully supports law enforcement, especially after the 2019 mass shooting at the school.

“It is important to support law enforcement. Those of us who have first-hand memories of November 2019 will never forget their heroic response and can only be grateful for their selfless acts of service,” the superintendent said.

However, some members of the school community feel that the district rushed its decision by not having an open discussion.

This is NOT tree sap all over your car


Lexi Hawk, mother of 16-year-old Wyatt, who usually carried the banner, told radio station KHTS that the controversy spilled over from social media to the school and district without the team even realizing.

“To say that we don’t respect other people is ridiculous… No one has talked about it. It wasn’t a round table discussion, so without discussion there is no democracy,” Hawk told KTLA.

Although the flag was not carried by the team on Friday night, many fans were seen in the stands wearing “thin blue line” flags and attire.

Despite the off-field drama, the Centurions defeated Hart 14-6, something some Centurion fans may want to focus on rather than the flag debate.

“It’s not about supporting something and saying everything else is bad,” said Saugus fan Ron Marome. “It’s just about saying, hey, we support the blue line. That’s it. It was that simple. It turned into something it shouldn’t have.”

Dammy Krane claims Davido sent his boys to attack him as debt row rages on.