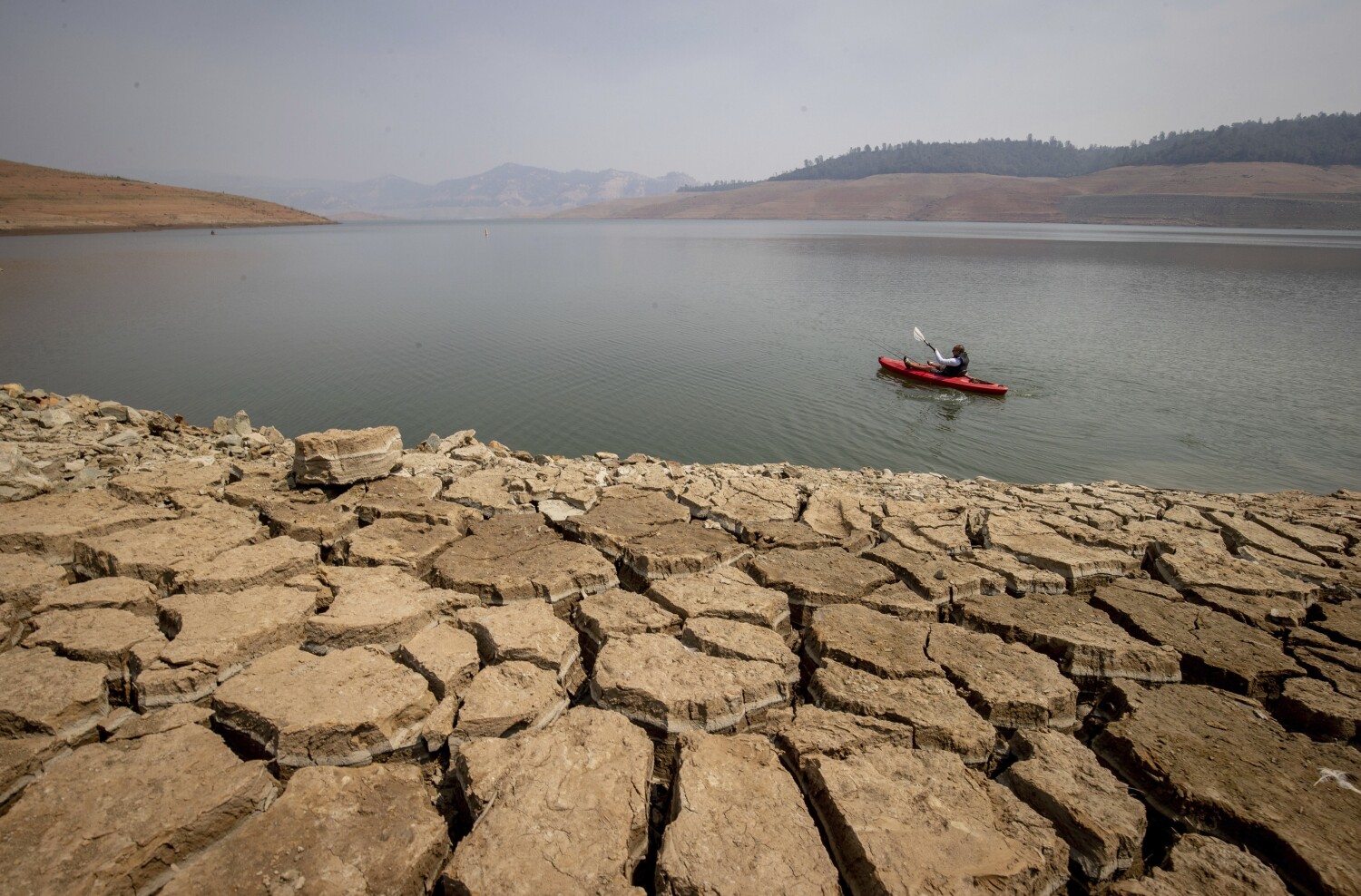 After a record dry start to 2022, California’s water authorities announced on Friday that they are cutting allocations for the state’s water project from 15% to 5%, warning residents to prepare for a third year of drought.

The news came just months after a rainy December offered temporary drought relief and prompted officials to announce a modest increase in previously allocated supplies. But after the driest January and February on record – and a March en route to follow suit – officials said they had to make cuts.

“We are witnessing climate change in real time, with extreme swings between wet and dry conditions,” said Karla Nemeth, director of the Department of Water Resources, in a statement. “That means adapting quickly based on the data and the science.”

The State Water Project is a complex system of reservoirs, canals, and dams that acts as a major component of California’s water system, serving 29 water agencies that collectively provide water to approximately 27 million residents. Officials said they will continue to meet critical health and safety needs for the agencies in addition to the 5% allocation.

Other water sources in the region, like the Colorado River, are also suffering from the drought, which experts say has been exacerbated by climate change. The American Southwest has experienced its driest 22-year period in 1,200 years, research shows.

Given the current conditions, Heather Cooley, a water researcher at the Pacific Institute, said the state’s decision makes sense.

“The reservoirs are low, the snowpack is low, so we’re not going to see a lot of replenishment of those reservoirs as the snow melts, and as a result we just have less water to run around,” Cooley said Friday. “I think an allocation cut is appropriate and justified.”

The reduced allocation is met with increased demands for conservation. Earlier this week, officials at the State Water Resources Control Board announced that Californians have fallen significantly behind in their conservation efforts, actually using 2.6% more water in January than in the same month in base year 2020.

In July, Governor Gavin Newsom called on all state residents to voluntarily reduce water use by 15%. Californians fell well short of that target, with about 6.4% savings between July and the end of January, data shows.

But Newsom hasn’t introduced mandatory restrictions so far — something his predecessor, Jerry Brown, did about two years after the last drought.

Cooley of the Pacific Institute said a nationwide order from Newsom is overdue.

“I think we need a mandate,” she said. “It’s a call to action. It really sends a message – and it is an important message – that this is a serious drought and we need to take proactive steps to conserve our water.”

The reduction announced Friday will likely have different impacts across the state, Cooley said. Some local authorities are heavily dependent on the State Water Project for supplies, while others have more access to alternative sources such as groundwater or recycled water facilities.

“The more diversified you are, the less dependent you are on the state water project, the better,” she said. “But not every church can do that.”

Some areas in the MWD’s region — including parts of Ventura, Los Angeles and San Bernardino counties — are particularly dependent on supplies from the State Water Project, and residents and businesses in those communities must reduce their water use immediately, General Manager Adel Hagekhalil said .

“Today’s announcement by the state is another strong indicator of our increasingly strained water supply and the seriousness of the situation we are facing,” Hagekhalil said in a statement. “We’re getting a fraction of what we used to get — fewer shipments than at any time in history.”

When asked Friday how the cut could affect MWD’s operations, spokeswoman Rebecca Kimitch said the agency must reserve State Water Project supply for areas that rely heavily on it and other areas on supplies from the Colorado Redirect River and other alternate sources. They’re also using pumps to pump more water from the Colorado River to State Water-dependent areas, she said.

“This 5% allocation is really, really important for this area,” said Kimitch. “Despite all of these operational changes that we’ve made, given this allocation, people in these communities need to significantly and drastically reduce their water use.”

As a wholesaler, the MWD has little power to enforce restrictions on the public, she said, but could potentially impose allocation caps on member agencies that cost money to exceed, a tool they have used in the past. She noted that 2022 marks the third straight year of low allocations and the second straight year of 5%.

“Five followed by five — that’s climate change,” Kimitch said. “These are absolutely unprecedented scenarios that we find ourselves in.”

Across the state, inventories are shrinking rapidly in response to drying conditions. As of Friday, statewide Sierra snowpack, most of which came from December’s heavy snowstorms, had fallen to 55% of the average for the date, officials said.

Meanwhile, nationwide reservoir levels were about 70% of the average.

Last year, drought conditions forced officials to shut down the Lake Oroville hydroelectric power plant for the first time since it was completed in 1967. It came back online earlier this year after the December storms.

On Friday, the Department of Water Resources said it would also file a revised “temporary urgency change petition” that will allow variances from typical water rights and uses through June, essentially allowing officials to release less water into the delta and use stored water in the delta Delta save reservoirs of Oroville, Shasta and Folsom.

A similar petition filed earlier in the year was withdrawn after the December storms, but “the new request is necessary due to dramatically changing conditions,” officials said.

They also plan to refill a notch in the emergency drought salinity barrier in the delta, which will allow for reduced flow from upstream reservoirs by late November.

Some experts have criticized the state’s strategy and response.

“They don’t really have a plan other than praying for rain and letting other people suffer the worst of their failure,” said Doug Obegi, a senior counsel for the Natural Resources Defense Council.

Obegi also expressed concern that the temporary change of urgency petition would allow the state to waive water quality standards in the delta that “protect farms, towns, fish and wildlife.”

“If the TUCP is granted, it is likely that violating water quality targets will result in larger harmful algal blooms that threaten communities in Stockton and elsewhere, not to mention native fish and wildlife,” he said via email.

After the dry start to the year, officials have fewer and fewer options. March, usually the last month of California’s rainy season, is expected to end dry, according to a rainfall forecast from the National Oceanic and Atmospheric Administration.

Meanwhile, the US Drought Monitor shows much of the state is suffering from severe drought conditions, with a growing area slipping into the extreme drought classification.

The Ministry of Water Resources will make another assessment of the state water project’s allocation after the next snow survey on April 1, officials said. A final allocation for the water year is usually announced in May or June.

Benefits of quarreling in marriage

Sometimes, life sucks. So he invented the Nasal Ranger.