UK developers and Housing Secretary Michael Gove are close to an agreement that could solve much of the building safety crisis highlighted by the 2017 fire at London’s Grenfell Tower that killed 72 people.

Home builders and the government have been locked in talks since the beginning of the year, with Gove urging the sector to release more funds for fire rehabilitation work on mid-rise blocks between 11 and 18 meters high.

The Housing Authority has estimated the cost of fixing security problems on blocks of this height in England at £4bn and has asked developers to pay, in addition to an annual levy on the sector charged for repairing buildings over 18 meters is used.

Several developers announced Tuesday that they have signed a pledge obliging them to fix life-threatening fire safety issues in mid-rise and high-rise buildings they’ve built over the past 30 years.

Those pledges will mean a big increase in the amount earmarked for repairing homes with fire safety problems – a sign that Gove’s tough stance is having some success.

Crest Nicholson, a FTSE 250 contractor, said it would allocate between £80m and £120m for modifications to one of its mid-rise buildings that require fire safety work – significantly more than the £47.8m it had previously earmarked to tackle Output.

It was the first contractor to announce that it had signed the pledge and estimated the estimated cost of rehabilitation work. Three of the UK’s largest builders quickly followed: Taylor Wimpey, Persimmon and Berkeley Group.

Taylor Wimpey said the pledge would cost an additional £80m to fulfill, on top of the around £165m already earmarked for firefighting work.

Persimmon said it was able to refurbish every fire-fighting mid-rise block it had built over the past 30 years without increasing its already announced £75m commitment. Berkeley has never disclosed its internal estimate of the cost of fire protection. 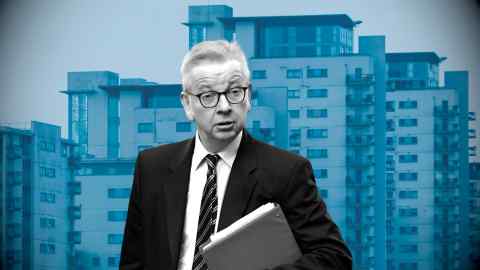 Other builders are expected to follow suit after Gove gave the sector until the end of March to come up with a fully costed mid-rise refurbishment plan.

Developer Bellway hinted last week that its clean-up costs could be incurred almost triple but did not give an exact number of the £187m it had set aside.

Developers who do not live up to the pledge will be excluded from the state housing fund and the planning process, severely limiting their ability to act.

Government officials welcomed the progress but insisted there was more work to be done. An unresolved issue is who should pay to repair blocks built by developers who have gone broke or are untraceable.

Since replacing Robert Jenrick as housing secretary in September last year, Gove has increased the pressure on homebuilders to pay to solve a crisis that has left tens of thousands of homeowners in properties with potential fire safety problems that are virtually unsaleable.

Clyde Lewis, an analyst at Peel Hunt, said the Crest Nicolson announcement was a sign that the sector was getting closer to accounting for the crisis, but that costs varied significantly between builders.

“It all depends on what they built historically: it will depend on who built a lot of high-rise buildings and who didn’t. Redrow and Persimmon built very few; Barratt, Berkeley and Bellway built a lot.”

A Housing Authority spokesman said: “We applaud the developers who have signed pledges so far, and we have the power to enforce a statutory solution if those affected do not do the same.”

The story of the "Five Fetuses" has gotten much stranger now

"I have a lot of self-loathing"

Musk the media mogul: he likes Twitter so much, he is buying it