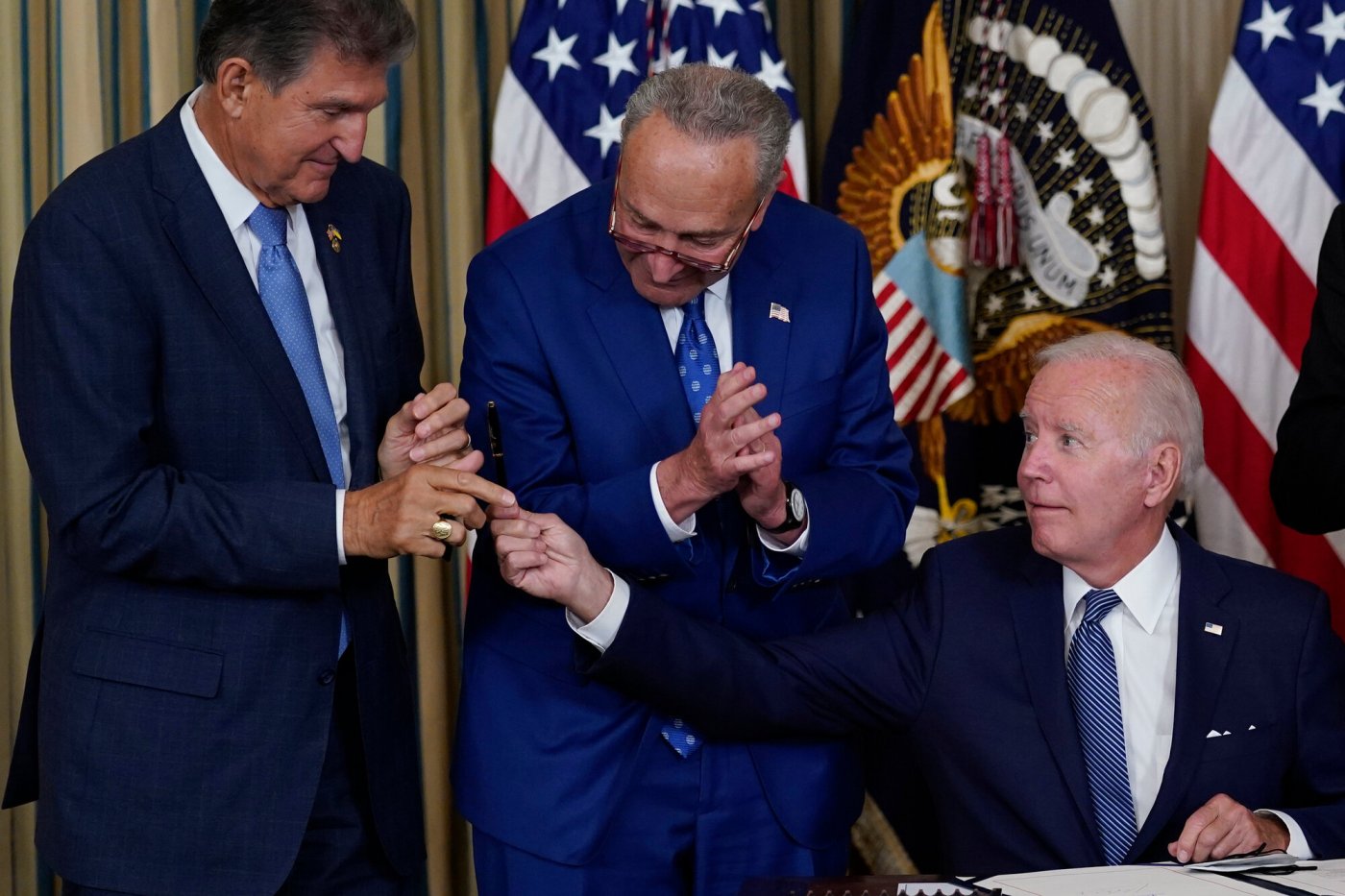 By Will Weissert and Zeke Miller | Associated Press

WASHINGTON — President Joe Biden and his allies are hoping that big recent victories on climate, healthcare and more will at least temporarily quell questions from top Democrats about whether he will stand for re-election.

That optimism could be short-lived and jeopardized if former President Donald Trump announces another campaign in the White House. But for now, the Washington parlor game of “Will he or won’t he” seems to be on hold.

“I think the naysayers are pretty quiet right now,” said former Democratic Gov. Terry McAuliffe of Virginia. “I think they saw the reality.”

Just in the last few weeks, Biden has signed into law a climate and prescription drug bill that achieves many of his party’s long-held goals; Congress has presented him with bills imposing severe restrictions on guns and a plan to boost US high-tech manufacturing. A drone strike killed al-Qaeda leader Ayman al-Zawari, average gasoline prices have fallen back below $4 a gallon and there are signs that inflation – although still white-hot – is finally cooling.

All of this has facilitated a widening debate about Biden’s future. Fellow Democrats running for re-election struggled to answer whether America’s oldest president should seek another term. But now they have a new agenda to push for the midterms in November.

The President has stepped up his fundraising efforts for the Democrats and is holding his first rally for the party of the fall campaign season next week in Maryland. He also plans to travel aggressively to promote candidates.

As a former senator, Biden knows that some lawmakers may need to distance himself from him to best win their races — but also that others could benefit from joint appearances. Aides say Biden could prove most useful when he reinforces issues Democrats champion that are widely held, such as lowering the cost of prescription drugs and protecting abortion rights.

Cedric Richmond, one of Biden’s closest White House advisers before leaving for a senior job on the Democratic National Committee, said he wasn’t sure the barrage of positive news would put an end to the 2024 questions, “but it should.”

But such comments don’t make the news, said Richmond, a former Louisiana congressman. “So the only story was if someone babbles or blows the question.”

These included New York Democratic Representatives Carolyn Maloney and Jerry Nadler, both of whom declined to say during a recent primary debate whether Biden should seek a second term. In a subsequent statement, Maloney said she would support Biden “if he decides to run,” and then drew even more scrutiny when she appeared on CNN by imploring Biden, “I want you to run. I happen to think you won’t run away.”

However, not all lingering doubts can be traced back to clumsy answers.

But Biden was not given up. Prominent Democrats, including New York Congressman Hakeem Jeffries, chairman of the House Democratic Caucus, openly praise him during campaign appearances. In an interview, Jeffries listed the president’s recent victories and included administration successes stemming from last year’s infrastructure spending and stimulus packages, as well as ongoing vaccination efforts against COVID-19.

“If someone were to say that a president had a track record of the kind I just described, without putting a timeframe for it, the logical answer would be: That person had a successful two-year presidency,” Jeffries said.

However, other Democrats say a few positive headlines won’t be enough.

“Biden will have good weeks and bad weeks in the news, but fundamentals remain unfavorable,” said Norman Solomon, national director of RootsAction.org. His progressive activist organization, which has often criticized the president, has launched a “Don’t Run Joe” campaign.

Solomon wants Biden to announce he is not running, freeing him to take greater political risks and pursue a more successful one-term presidency. He suggested that White House advisers concerned about turning Biden into a lame duck are “meaningly whistling past the political graveyard.”

White House allies stress that the 2024 decision will ultimately be Biden’s alone. He is on track to follow a similar schedule to former President Barack Obama, who declared himself seeking re-election in 2012 in April 2011, aides say.

No modern incumbent president has faced such hesitation in his own party or been seriously threatened in a primary. Challengers within the party, if they emerge, could weaken both the president and his party.

Some Biden observers see the president, who came out of political retirement because he believed he was best placed to take on Trump in 2020, as less likely to run for re-election if his predecessor ultimately chooses not to to run for office.

If Biden runs, he will have to compete with voters his age – convince them that he is really ready for a second term that would not end until he is 86. Still, Richmond said such discussions could actually help Biden.

“I’m not going to let people suddenly say that wisdom and experience are bad things,” he said. “The President of the United States, leader of the free world, that is what you want.”

While Biden’s age is unprecedented — so would Trump at 82 — there is almost as little tradition for presidents not to seek re-election after only four years in office. The last was Rutherford B. Hayes in 1880.

Texas Assemblyman Jasmine Crockett, a civil rights attorney who is expected to win a Dallas open house seat, said if Biden “decides that he wants to run, we need to unite behind it.” But she also said the president had not campaigned aggressively enough to retain the right to vote.

“From a public perspective, especially when it comes to black people, it wasn’t taken too kindly that they didn’t see or hear more of the president coming,” Crockett said. “If black people come out and vote, the Democrats win. If blacks stay home, Democrats lose.”

Biden last month insisted Democrats “want me to run.” But a Quinnipiac University poll in July found that just 24% of Americans overall and 40% of Democrats said so. The President’s approval rating has fallen below 40% for two straight months.

As a positive reinforcement, Biden could look to a president at the other end of the political spectrum: Ronald Reagan, who took office in 1981 at the age of 69, making him the oldest president in the country at the time.

As inflation rose in the fall of his second year, a Washington Post-ABC News poll found that 6 in 10 Americans said Reagan should not run again, and his approval ratings dropped to 35% by the following January. The next year, Reagan ran for re-election, winning every state except Minnesota and the District of Columbia.

McAuliffe, who was beaten by Republican Glenn Youngkin in his attempt to retake the governorship last November despite Biden leading Virginia by 10 points the previous year, said the president and Democrats have already picked up steam and “age doesn’t matter “.

“He’s at the top of his game. And this party that was in disarray a year ago and various elements of our party that are fighting each other,” McAuliffe said. “Now you have a party that is united, enthusiastic, and has legislative accomplishments that every American has desired for many years.”

https://www.ocregister.com/2022/08/18/big-summer-wins-give-biden-some-2024-breathing-room/ Big summer gains will give Biden some breathing room in 2024