Belgium’s prime minister has accused the US of an “aggressive” campaign to lure European companies across the Atlantic with promises of support under its new green subsidy law.

Alexander De Croo told a meeting in the European Parliament on Tuesday that the US is trying to undermine EU industry with the Inflation Reduction Act, a €369 billion support program passed in August.

“The United States, our partner . . . You name our industry. And they tell you why are you investing in Europe? You should come to the US. Called on German companies and Belgian companies in a very aggressive way – don’t invest in Europe, we have something better,” he said at a seminar by his centrist political group Renew.

He later told the Financial Times that Americans are “using the IRA in a very aggressive way to attract investment. You could say it’s fair game, but then you shouldn’t say, ‘Oh, we forgot the impact on Europe’.

“I mean, I think they were well aware of the potential impact.”

De Croo said Belgian chemical and steel companies have been approached. He doesn’t know if the federal government, US states, or private investment advisors made the calls.

But an EU official said the issue had also been raised by other leaders and it was a concerted campaign.

Many of the subsidies in the IRA are only available to companies that operate or manufacture in the United States. The Biden administration has said it will try to find ways for European companies to access some of them by implementing the legislation.

An EU-US task force has met several times and made modest progress: a €7,500 electric vehicle tax credit will be available for EU-made vehicles sold under commercial leases, although not directly Consumer. 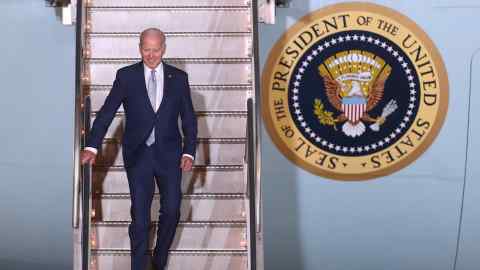 De Croo said the only answer to the “unfair” US law was to introduce similar subsidies.

De Croo also accused Washington of “intimidating” the Netherlands into imposing an export ban on advanced silicon chip-making equipment to China. The US is in talks with the Dutch and Japanese, the other countries are producing machines that make the most advanced chips. “US interests are not always EU interests,” he told the meeting.

He said the Netherlands would be “isolated” but should work with Brussels to resist the US demand.

“Some of our partners don’t like the EU? Why don’t they like the EU? Because it’s easy to bully a small country. It’s a lot harder to bully a group of 27. Our unity is our strength.”

Kentucky falls to South Carolina at Rupp Arena, falls to 1-3 in the SEC