The victory of the Italian right in Sunday’s general election, predicted by exit polls, is in some ways a milestone for Italy and European democracy. But there is good reason to question the view occasionally expressed outside Italy during the campaign that the result portends a backslide toward extremism.

Under the Christian Democrats, the right dominated Italy’s governments during the Cold War. From the 1990s onwards, it prevailed most of the time, thanks largely to Silvio Berlusconi’s Forza Italia party. But this is the first election in which a party with neo-fascist roots, the Brothers of Italy, has emerged as the strongest force on the right and nationwide.

Despite some electoral successes by similar parties in western European democracies such as Austria and Sweden, the victory of the brothers of Italy stands out. What is certain is that party leader Giorgia Meloni will become prime minister, making her the first woman to hold this office since Italian unification in 1861.

The fact remains, however, that Meloni triumphed on a conservative-nationalist platform that owed far more to the formulas that had made Berlusconi’s coalitions successful than to any policies related to the Italian social movement, the neo-fascist party of the late 1940s and 1950s from which the brothers of Italy indirectly descended. “To speak of fascism is just wrong,” says Lorenzo Codogno, a former director general of Italy’s finance ministry.

That is not to say that there are no difficulties ahead. Meloni has only minimal government experience, and her party colleagues even less. The international reputation of Mario Draghi, the outgoing technocratic prime minister, boosted Italy’s voice at the NATO and EU tables. The new government will fight to gain the same respect.

But Meloni has positioned herself as a solid supporter of the West’s stance against Russia’s aggression in Ukraine – more solidly even than Berlusconi or Matteo Salvini, leader of the Lega, their right-wing coalition allies. The Brothers of Italy election manifesto also omitted controversial proposals once adopted by the party, such as enforcing the primacy of national law over EU law. 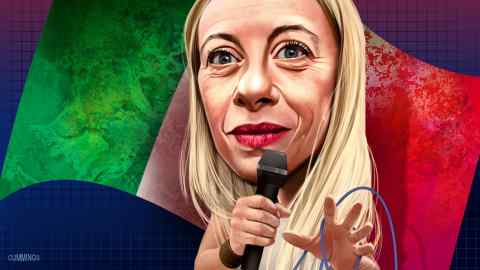 More generally, the continuity of Italian politics is largely guaranteed by strong institutions in the form of the President, the Constitutional Court, the two chambers of Parliament, the Central Bank and the Treasury. Partly in response to the Fascist experiences of 1922-1943, post-war Italy carefully distributes power among various centers in a way that makes it difficult for the executive branch to act in dangerously radical ways.

From the perspective of the financial markets, a big test for the new government will be the annual budget that it has to prepare by the end of the year. The winning coalition’s program called for tax cuts for individuals and businesses, combined with higher spending on pensions and family benefits.

Any attempt to fully implement such a policy would risk a violent reaction from markets concerned about Italy’s public debt of about 150 percent of gross domestic product. It seems possible that, to allay such fears, Meloni could elect a respected independent public figure as finance minister – as previous Italian governments of various persuasions have done over the past 30 years.

The brothers of Italy represent a level of state economic intervention and national protectionism that risks alienating Rome’s EU allies and markets. Meloni has also floated the idea of ​​rewriting the terms on which Italy will have access to around €200 billion in EU post-pandemic recovery funds.

The bigger question is whether the new government will have the skill and determination to continue with the economic and administrative reforms started by Draghi. These are a prerequisite for the further release of EU funds.

The incentive to continue the reform efforts is clear. But no less obvious is the possibility that right-wing parties, who hardly agree on economic issues, could engage in internal squabbles that stymie reforms. The dismal record of the Berlusconi governments on economic reform is a reminder that even a healthy parliamentary majority for the right is no guarantee of progress in Italy.

Meloni has her chance because she ran an effective campaign and emerged as the only major party leader not to join Draghi’s national unity government. But she will know that most Italian prime ministers since World War II have never served anywhere near a full five-year term, falling victim to political intrigue and a loss of authority instead. If things turn out differently for her presidency, it could be her biggest success ever.

This is how Climate Change and Covid are transforming skiing

America needs to get women back into work