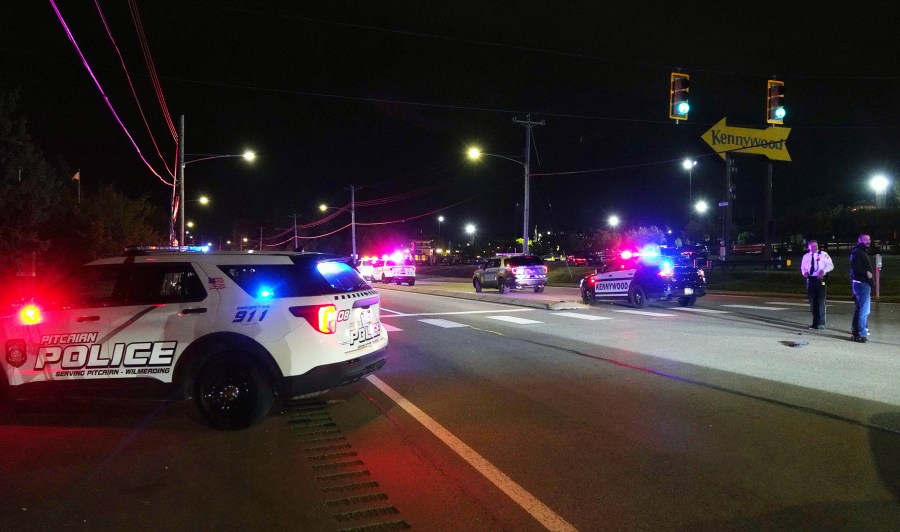 WEST MIFFLIN, Pa. (AP) – Three people, including two teenagers, were injured by gunfire late Saturday at an amusement park southeast of Pittsburgh that was opening a Halloween festival.

Allegheny County Police said a 39-year-old man and two 15-year-old boys sustained leg wounds from the gunfire just before 11 p.m. Saturday at Kennywood Park in West Mifflin. Park security responded along with local and county police working as a security detail at the park.

Witnesses told investigators that two groups of teenagers were involved in an altercation in front of the Music Express ride and shots were fired by a man wearing a black hooded sweatshirt and dark COVID mask. A firearm was found near the crime scene, police said.

Kennywood posted a statement on Twitter around 12:30 a.m. Sunday, saying the park had closed for the night and all guests had left the park. The company said it was “working closely with the police in the investigation.”

“We are deeply saddened by the violence that took place last night,” Kennywood said in a statement Sunday afternoon. “Our thoughts are with those who were hurt by the incident, as well as all guests and team members affected by what happened.”

Kennywood said security protocols for park entry include “a state-of-the-art weapon detection system,” as well as video scanning and bag checks, and the presence of county and local police. The park’s website also states, “Weapons of any kind are strictly prohibited in the park.”

Police are investigating with the help of the park’s security cameras and eyewitness accounts, KDKA-TV reported. County police asked anyone with information or video to contact investigators. The Pittsburgh Public Safety Department said in a social media post that its officers would help.

Kennywood celebrated the first night of its Phantom Fall Fest, which is set to run through October 16, according to the park’s website. The park will close on Sunday, with tickets for that day valid for any other day of Phantom Fall Fest, and is scheduled to reopen on Friday, the park said on its website.

The website bills the park as a family fun destination, with seven roller coasters and rides for children.

Ward Troetschel, from West Mifflin, told the Pittsburgh Post-Gazette he arrived around 9:45 p.m. on Saturday and saw “far too many unaccompanied minors”. He said he left around 10:30 p.m. because young people were aggressive and “trying to start arguments”. As he left, groups of at least 100 people ran past him two or three times, Troetschel said, calling it a scene of “a lot of chaos.”

Irwin’s Thomas Harrison told the Tribune-Review that he was with his fiancé and parents when the shots rang out, and then people screamed, ran and pushed each other to get out of the park.

“Kids cried,” Harrison said. “Some people were looking for their loved ones.”

The abortion war of the worlds is over