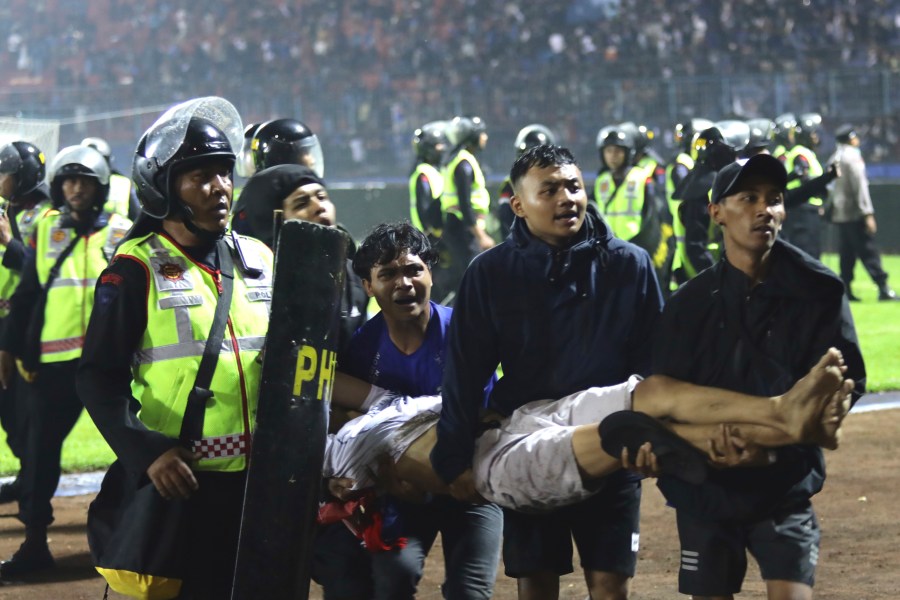 MALANG, Indonesia (AP) – Police firing tear gas to stop the violence after an Indonesian soccer game sparked a disastrous rush of fans who ran in a panic and chaos towards the exits, killing at least 125 people, most of them dead trampled on or suffocated.

Attention was immediately drawn to police control measures at Saturday night’s match between hosts Arema FC from the city of Malang in East Java and Persebaya Surabaya. Witnesses reported officers beating them with sticks and shields before firing tear gas canisters directly into the crowd.

It was one of the deadliest disasters in a sporting event. President Joko Widodo ordered an investigation into safety procedures and the FIFA president called the deaths “a dark day for everyone involved in football and a tragedy beyond imagination”. While FIFA has no control over domestic matches, it has discouraged the use of tear gas in football stadiums.

Brawls are common among rival Indonesian football fans, so the organizer banned Persebaya supporters from Arema’s stadium. But violence erupted anyway as the home team lost 3-2 and some of the 42,000 Arema fans known as “Aramania” threw bottles and other objects at players and football officials.

Witnesses said fans flooded the pitch at Kanjuruhan Stadium, urging Arema management to explain why it ended in defeat after 23 years of unbeaten home games against Persebaya.

At least five police vehicles were overturned and set on fire in front of the stadium. Riot police responded by firing tear gas, including into the stadium’s stands, causing panic among the crowd.

“The stadium turned into a smoky battlefield as the police fired tear gas,” said Rizky, who only has one name. He came with his cousin to watch the game.

“I felt hot and stinging in my eyes, I couldn’t see clearly while my head was dizzy and everything went dark…I passed out,” he said. When he woke up, he was already in the emergency room. He said his cousin died from head injuries.

“We wanted to entertain ourselves by watching a football game, but we ended up with a disaster,” he said.

Another bystander, Ahmad Fatoni, said police started beating fans with sticks and shields and they fought back.

“The officers fired tear gas directly at the spectators in the stands and forced us to run to the exit,” he said. “Many victims fell from tear gas and were trampled on due to shortness of breath and blurred vision.”

He said he climbed onto the roof of the stands and only came down when the situation calmed down.

Others were suffocated and trampled as hundreds of people ran to the exit to avoid the tear gas. In the chaos, 34 died at the stadium, including two officers, and some reports include children among the victims.

“Some were kicked, some fell, and some got hit,” Rian Dwi Cahyono told Sky News from the hospital where he was being treated for an injured arm. When asked what started the panic, he replied, “Tear gas.”

National police chief Listyo Sigit Prabowo said the death toll had been revised from 174 to 125 after authorities found some of the victims had been double-counted. More than 100 received intensive care in eight hospitals, eleven of them in critical condition.

“We were already taking preventive measures before finally firing the tear gas when (fans) started attacking the police, acting anarchically and burning vehicles,” he told a news conference early Sunday.

The Indonesian Football Association, known as PSSI, has suspended the first football division Liga 1 indefinitely in light of the tragedy and banned Arema from hosting football matches for the remainder of the season.

Mourning relatives awaited information about their loved ones at Malang’s Saiful Anwar General Hospital. Others attempted to identify the bodies lying in a morgue while medical personnel affixed identification tags to the victims’ bodies.

“I deeply regret this tragedy and hope this will be the last football tragedy in this country. Don’t allow another human tragedy like this to happen in the future,” Widodo said in a televised address. “We must continue to uphold the sportsmanship, humanity and a sense of brotherhood of the Indonesian nation.”

He ordered the sports minister, the national police chief and the PSSI chairman to conduct a thorough assessment of the country’s football and its security procedures.

Youth and Sport Minister Zainudin Amali said the incident “certainly damaged our football image”. Indonesia will host the FIFA U-20 World Cup 2023 from May 20th to June 11th with 24 participating teams. As the host, the country automatically qualifies for the cup.

In a statement, FIFA President Gianni Infantino expressed his condolences on behalf of the global football community, saying: “The football world is in a state of shock.” The statement made no mention of the use of tear gas.

At the Vatican, Pope Francis said he was praying for “all who lost their lives and were injured in the clashes that erupted after a football match in Malang, Indonesia.”

The restriction on Persebaya fans entering the stadium was imposed after clashes between supporters of the two rival teams at Blitar Stadium in East Java caused 250 million rupiah ($18,000) in damage in February 2020. Clashes outside the stadium were reported during and after the semi-finals of the East Java Governor’s Cup, which ended in Persebaya beating Arema 4-2.

Rights groups responded to the tragedy by blaming the use of tear gas by police inside the stadium.

Citing FIFA’s stadium security policy against the use of crowd control gas by pitchside stewards or police, Amnesty International called on the Indonesian authorities to conduct a swift investigation into the use of tear gas and to ensure that those who committed violations Doing so are tried in open court hearings and not only receive internal or administrative sanctions.

Usman Hamid, executive director of Amnesty International Indonesia, said tear gas should only be used to disperse crowds when there has been widespread violence and other methods have failed. People must be warned that tear gas will be used and allowed to spread. “No one should lose their life at a football game,” said Hamid.

Hundreds of soccer fans, mostly in black jerseys, held a vigil for the victims of the disaster at Gelora Bung Karno, Indonesia’s largest sports stadium in the capital Jakarta, on Sunday night. They sang songs they had composed to lift the spirits of the grieving Aremans.

Despite Indonesia’s lack of international sporting accolades, hooliganism is rife in the football-obsessed country, where bigotry often ends in violence, as in 2018 with the death of a Persija Jakarta supporter by a mob of hardcore fans of rival Persib Bandung in 2018.

Data from Indonesia’s football regulator Save Our Soccer shows that 78 people have died in match-related incidents over the past 28 years.

Saturday’s game is already among the world’s worst mass disasters, including the 1996 World Cup qualifier between Guatemala and Costa Rica in Guatemala City, which killed over 80 people and injured over 100 others. In April 2001, more than 40 people were crushed to death during a football match at Ellis Park in Johannesburg, South Africa.

https://wgntv.com/news/nexstar-media-wire/125-die-as-tear-gas-triggers-stampede-at-indonesia-soccer-match/ 125 die when tear gas triggers a stampede at a soccer game in Indonesia

Pope warns of danger of nuclear war; appeals to Putin about Ukraine

New York prosecutor offers plea to suspect of anti-Semitic attack who allegedly said he would do it again.

Northwestern is in for a historic Ireland opener